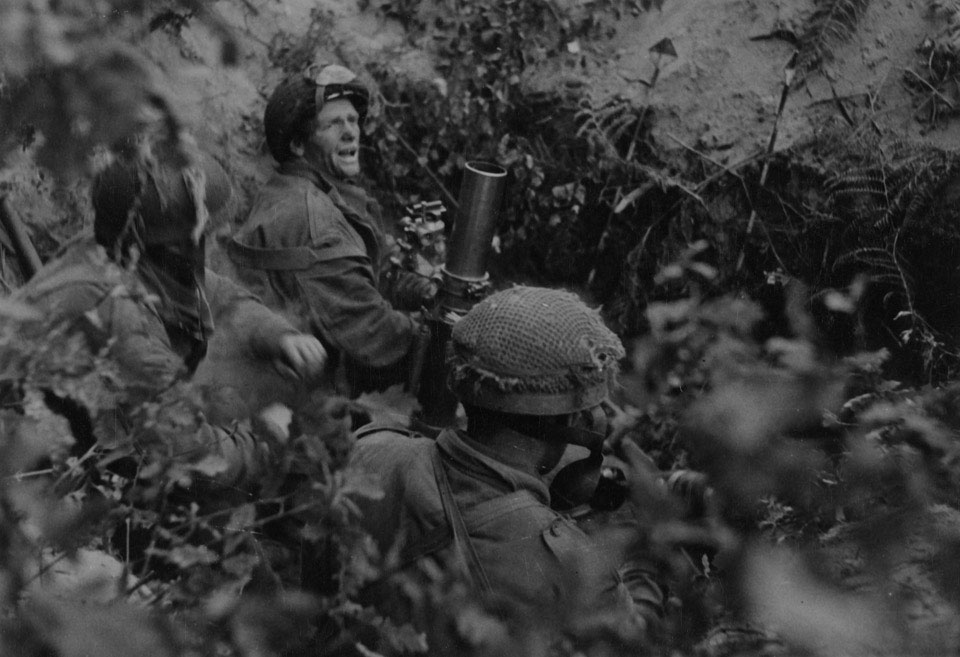 The summer following June 6, 1944—D-Day—found the Allies digging deeper into enemy territory. “Operation Market Garden” involved nearly 42,000 American, British, and Polish airborne troops. Its objective was to secure Rhine River crossings in Holland in order to advance into northern Germany and end the war in Europe by Christmas. The 101st and 82nd U.S. Airborne Divisions were to seize key bridges in the Netherlands, while their British counterparts would arrive via parachutes and gliders.

Once these bridges had been secured, the Allies could outflank Germany’s frontier defenses known as the Siegfried Line and proceed in armored vehicles into Germany’s industrial center.

The divisions sprang into action on September 17th, and in one of history’s largest airborne operations, all of the bridges were captured and secured, all that is, but one. Hindered by traffic jams along a single, narrow causeway and German counter-attacks, the British were unable to take the Arnhem bridge. Allied intelligence had failed to detect and report the presence of German tanks, including parts of two SS Panzer divisions, and the British were outflanked by the Germans, unable to resist those tanks with the few heavy weapons they had.

Additionally, the area was heavily wooded, which hampered the range of wireless sets, resulting in communications problems. In England a thick fog, along with low clouds over the battle zone, hindered resupplying the troops and the air-lifting of reinforcements.

On September 23rd Sgt. Dennis Smith wrote, “We have had a very heavy shelling this morning. . . and now the situation is serious. The shelling is hellish. We have been holding out for a week now. The men are tired, weary and food is becoming scarce, and to make matters worse, we are having heavy rain. If we are not relieved soon, then the men will just drop from sheer exhaustion.”

During the next two days, over 2,000 101st Airborne Division troops were ferried back across the Rhine with another 7,500 dead or made prisoners of war. The capture of Germany’s industrial center would not occur for another six months.

Despite the debacle, the “determination and courage shown by Allied airborne troops and the units that tried to reach them,” were a remarkable demonstration. And large swathes of the Netherlands had been liberated when many of the Dutch were on the verge of starvation.

Today, 8,301 American soldiers who died in Operation Market Garden are buried near Maastrict in the Netherlands. Each of them, along with the Canadian and British dead buried in their nearby military cemeteries, has been “adopted by a Dutch family who mind the grave, decorate it, and keep alive the memory of the soldier they have
adopted. It is even the custom to keep a portrait of “their” soldier in a place of honor in their home.”

Every year on “Liberation Day,” “the men who died to liberate Holland” are honored in memorial services, and at the end of the day, there is a concert. At the end of the concert, the final piece is always “Il Silenzio.” Commissioned by the Dutch, this song is based on the original version of Taps, and was composed by Nino Rossi. It was first played on the 20th anniversary of the liberation of Holland.

Back in 1944, War Correspondent Alan Wood said, “If in the years to come, you meet a man who says, ‘I was at Arnhem,” raise your hat and buy him a drink.” Today, the Dutch continue to honor those who liberated them from tyranny.

(I owe my thanks to London’s National Army Museum for the information on which my story is based.)