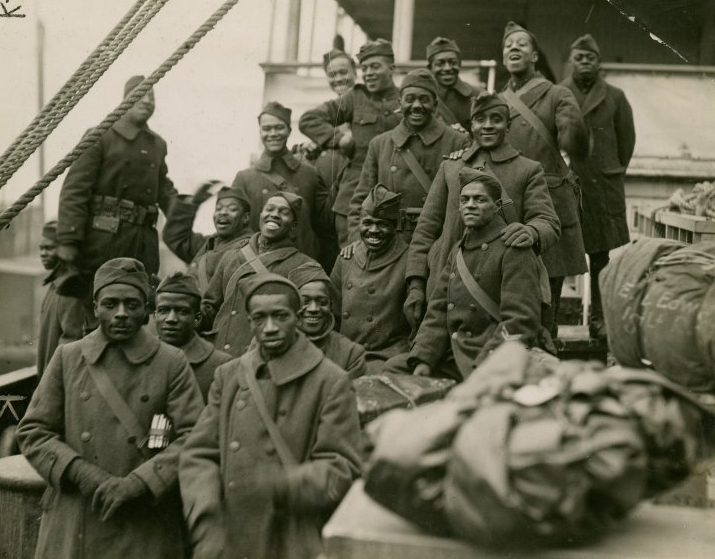 When President Woodrow Wilson called Americans to arms in the spring of 1917, tens of thousands enlisted for the fight “over there” in Europe. Among them were roughly two-and-a-quarter million men of color, including one of the mostly highly-regarded regiments in the U.S. Army, its volunteer 369th Infantry, which became known as the Harlem Hellfighters. They originated in a New York National Guard unit and did their basic training at Camp Whitman, moving on to Spartanburg, SC to prepare themselves for combat. After enduring significant prejudice, the unit shipped off to Europe in December.

Initially they were assigned to manual labor and their guns confiscated, but when the French begged for manpower at the front, General John J. Pershing reluctantly began committing some of his troops, including the 369th Infantry.

Their nickname originated on the battlefields when either the French or Germans first started calling them “Hellfighters” because of their particular fierceness. A fine representative of their courage and determination was a man named Henry Johnson, who took on and killed four Germans in hand-to-hand combat and rescued a wounded American soldier despite enduring 21 wounds in the process. One chronicler reported, “An entire platoon of 28 German soldiers scattered and fled at the sight of Johnson’s prowess.”

The 369th spent more hours in battle than any other U.S. unit; they never lost an inch of ground nor were any of their numbers captured. Theirs was the highest casualty rate of any U.S. unit, and there were zero deserters. Of all the U.S. regiments, they received the most decorations. The French government awarded their highest honor, the Croix de Guerre, to the regiment, and several of the Hellfighters received the U.S. government’s Distinguished Service Cross. Henry Johnson received posthumously the Medal of Honor in 2015.

One of America’s leading musicians, James Reese Europe, was a Harlem Hellfighter who helped the unit achieve yet another distinction – the best-known, largest Army band. They introduced the French, who loved them, to American ragtime and jazz music.

The regiment’s commander, Col. William Hayward, was a champion of black civil rights, and the Hellfighters had the highest regard for him. When they returned from the war in 1919, Hayward organized a huge parade in their honor to welcome them. In an inspirational moment of racial harmony, thousands of New Yorkers turned out to cheer them.

Despite Woodrow Wilson’s low opinion of African-Americans and record of discrimination, a different President, Calvin Coolidge, had a far different perspective. Speaking at Howard University’s commencement in 1924, Coolidge sang their praises, saying they had “repeatedly proved their devotion to the high ideals of our country. They gave their services in the war with the same patriotism and readiness that other citizens did. . . .”